This review is free of major spoilers, in the interests of being helpful to those who are considering playing the game in question.

“What happened in Year 0 that made everyone forget?” 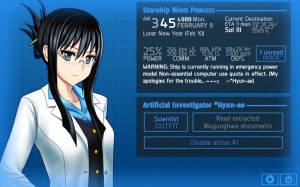 Another normal morning for a space investigator.

…free of major spoilers. Oh dear me, is this going to be difficult.

Analogue: A Hate Story was one of the rare visual novels that do more than simply provide entertainment. You may recall me gushing about it a few months back. Hate Plus is its sequel, picking up exactly where Analogue left off and carrying on many of the themes from its predecessor. END_OF_DOCUMENT_TOKEN_TO_BE_REPLACED

This review is free of major spoilers, in the interests of being helpful to those who are considering playing the game in question.

“Men are honored, women are abased.”

I’ve played quite a few visual novels by now, but never before have I played one that did such an excellent job of justifying the gameplay elements of a visual novel, grabbing my attention, and holding it. Analogue does all of these things. END_OF_DOCUMENT_TOKEN_TO_BE_REPLACED

Building up suspense in a work can be a Herculean task, no mistaking it. In order to make sure that the audience is invested in a work, the writers need to pace things deliberately, stacking plot points delicately one on top of the other to form a natural progression. A stumble at any step along the way can diminish the impact of major plot points being revealed. This means that authors must balance foreshadowing with enough false leads to prevent their intentions from being obvious.

…or, alternatively, they can state what they’re going to do outright, removing all doubt.

Telling your audience the conclusion of the story before it begins is similar to beginning a story in medias res, but more so. For a story begun in medias res, the viewer knows that the story will eventually reach the point given and then pass by. There can still be doubt about where the story goes. A foregone conclusion, on the other hand, leaves no doubt whatsoever.

Consider the work of William Shakespeare. Generally, you can tell how one of his plays is going to end simply by looking at the title. If the play’s full title is The Tragedy of Othello, Moor Of Venice, then you can tell that things are not going to end well for Othello, Moor of Venice. In some cases, though, he takes it even further. Romeo and Juliet, one of his most famous plays (and probably one of my least favorite Shakespeare plays) has a prologue that lays out the entire plot in exacting detail. To paraphrase:

“There are two families in Verona who really hate each other. They’ve started fighting again, but their children are falling in love. Both children will die. Over the next two hours we’ll show you how exactly that happened.”

Now, for Elizabethan theater this would have worked fine: the audiences didn’t exactly have the longest attention spans, and they may or may not have been missing the dialogue while the hazelnut vendors made their way through the audience like beer-sellers at a baseball game. It’s not much different now: while we’ve certainly grown more “civilized” as an audience (bathing regularly and not shouting advice to the actors, for instance) the plots of most of Shakespeare’s plays are so familiar to society as a whole after being performed, adapted, and lifted into Hollywood films a million times over. With other media, though, it can be hit-or-miss.

Let’s start with a miss. Consider Star Wars: a trilogy beloved by almost everyone, followed in production by a trilogy that nobody likes to talk about. The main reason, of course, is that in the eyes of the fans nothing could hope to compare to the Original Trilogy–The Empire Strikes Back, especially. The second reason is that the writing for the prequel films isn’t all that good (“I hate sand,” anyone?) and not even storied actors like Christopher Lee and Liam Neeson can bring brilliance to lines that don’t lend themselves to it. However, the prequel trilogy had something going against it beyond that: it had a definite destination that it needed to arrive at. Before the story even began, practically everyone who would be interested in it already knew how it would end.

Watching Episodes I, II, and III, the average viewer will already have seen the ones denoted as IV, V, and VI, so they know exactly which characters are important. “Hmm… this guy looks important, but I don’t remember hearing about him before. He’s going to die.” “Yoda’s locked in a duel to the death? Wake me up when it’s over, I know how this one ends.” “Wow, this Anakin kid sure is annoying. Wonder how long it takes him to become evil? …how much runtime is left in the film?”*

With a foregone conclusion, the question is not “what?” but “how?” and the focus of the story becomes the journey rather than the destination. In Episodes I, II, and III of Star Wars, the journey was simply not enough.

On the other hand, if the journey is done well, the conclusion can be that much more powerful for knowing that it is approaching. Such is the case with Narcissu 1st & 2nd, a visual novel that I recently played and cannot recommend enough. (Seriously. It’s free on Steam. You can finish the entirety of 1st in 1-2 hours. You have no reason not to play it.)

Narcissu is the story of two patients in a hospital. In most games you would be allowed to hope for them, to believe that there was some way they could survive. In most games you would be right to do so: as a whole, the medium of video games seems to be more relentlessly optimistic than any other. Narcissu is not most games. The ending is stated plainly, clinically, at the beginning, in the same way that the characters receive the news from their doctors.

“This is the story
of a girl whose heart was standing still
and a boy whose breath was being stolen away,
both of whom die.”

So then (I imagine you are wondering), if the characters know that they are going to die and you know that they are going to die, what’s the point? As previously stated, it’s the journey, not the destination, that matters. This is reflected in the thoughts of the protagonists: even as they are dying, they give themselves a goal: to reach Awaji Island and see the blooming flowers, so that they can at least have some happy memories before they die. The story, then, becomes about whether or not they will reach their destination, and how.

Narcissu is divided into eight chapters, plus a prologue, and the further in I read, the more impact that the story had on me. I’ll not reveal any specifics about the plot–as I said, after all, it’s the journey that matters–but I will say this much: despite the fact that I knew how the story would end, seeing the ending for myself still brought me to tears. That was a foregone conclusion done right.

Although spoilers are still the root of all evil, knowing how a story is going to end doesn’t necessarily make it less enjoyable. On the contrary, if a story is well-written and well-constructed, the final product will be all the more poignant for it. Share your own thoughts on the efficacy of this method in the comments below. Signing off, until next week!